Principals discuss the New Education Policy and its impact at Shillong 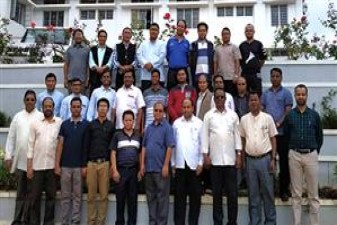 Shillong, Jul. 8. Shillong: A two day INS School Principal's Meeting was held from 5th - 6th July 2019 at Don Bosco Provincial House, Shillong. It was organized by the Education Commission of the province in collaboration with the Provincial Team. 30 members were present for the meeting. The meeting began with a Bible reading by Brother Anand Lakra and prayer by Father Babu Stephen. Thereafter, Father John Zosiama, the Vice Provincial welcomed everyone and highlighted the purpose of the meeting.

The first session began with a brief presentation of the Draft National Education Policy by Father Richard Majaw, the in-charge of the Education Commission, Archdiocese of Shillong. Father Richard highlighted some important and relevant points of the new National Educational Policy and the possible responses from the church. After this the floor was open for discussion. The participants raised a number of questions and concerns and they were clarified and answered by Father Richard and other members. Mr. George Pariat, a retired Inspector of School and a member of Education Commission, Mawlai Parish, also intervened and enlightened the participants more on the new education policy. At the end of this session, Father Anthony Kharkongor thanked Father Richard on behalf of the province and Father Provincial presented a small token of gratitude to him.
The second session began with the presentation of the school report from various regions by principals. Mizoram region began the presentation which was followed by Barak valley; thereafter, Tripura region and ended with Meghalaya region. It was a very enlightening and enriching presentation by various schools. The presentation also gave a detailed statistics and important information of each school.

The afternoon session dealt with some common concerns of the education commission of the province. The common uniform and supply of note books for all the schools in the province was the highlight of the discussion. A number of suggestions were brought out by the participants for further clarification and approval.

The second day meeting began with the discussion on the proposed Don Bosco Board of School Education (DBBOSE) in the province. The participants gathered together region wise for a group discussion and brought out a number of valid and solid suggestions. The pros and cons of setting up of the board of school education in the province were also brought to the notice of the participants. The core committee was entrusted with responsibility of studying the formation of the board.

Father Anthony Kharkongor, Youth Pastoral Delegate also presented the works of youth ministry and the formation of Salesian Youth Movement (SYM) in the province. Concerning the Bosco Olympics and the centenary celebration in the province level were also discussed in a nutshell during the meeting.