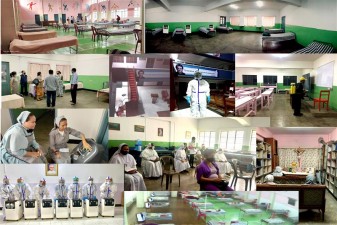 Hyderabad, Jan. 10. Declaring that 'Children's voice should be heard and their views should be respected' Honorable Adimulapu Suresh, the Andhra Pradesh Education Minister inaugurated the National Convention of the school Human Rights Clubs on December 28, 2019 at Vijayawada. The National Convention was part of the Human Rights Education of People's Action for Rural Awakening, Ravulapalem, with the participation of almost 600 girls and boys representing 630 schools in 7 districts of Andhra Pradesh and 5 districts of Telangana.

Dressed in Pink and Yellow T-Shirts, with the slogan ''We Raise our Voices, We Talk of our Rights. Join us'' the girls and boys were the cynosure of all eyes, especially of the Education Minister and the Chairperson of the State Commission for the protection of Child Rights, Mrs. Hymavathi.

These HRC children, mostly belonging to classes 7 to 9, made history at the Makineni Basava Punnaiah Vignana Kendram where the programme was held. The convention began at around 10.00 with songs on Human Rights and Child Rights. The club members, interspersed their songs with slogans human rights and catchphrases on the Sustainable Development Goals.

The Education Minister was happily surprised at the children holding themselves up as child-human rights defenders. He listened to every child that spoke up. He carefully paid attention to the 10 demands that they had submitted in a memorandum. He was amazed at finding children be so articulate in their views and the kind of practical activities they carried out to promote child rights and to prevent child marriages, strop child labour, bring dropout children back to school and so on. In all modesty and earnestness the acknowledged that he had never thought that this generation is inclined towards social intelligence and social awakening, and not merely to technical, professional and competitive pursuits. I am thrilled to see such vibrant students working against social evils and striving for a society that respects differences.''

Lauding the efforts of PARA, he said that the students should be provided with value-based 360-degree education. Children should be guided to grow up in freedom and choose the kind of education they wanted. ''I strongly believe that the voice of children should be heard and views should be respected,'' the minister said. He responded very positively to the demand to allocate a day for hearing the grievances of children as part of the State Spandana Programme. He added that poverty should not become a hurdle for anyone's education. In fact, he wanted that everyone should get English-medium school. He was delighted to hear children from government schools speak fluently in English.

The minister told the young participants that their self-respect and self-dignity should never be compromised even when they grow older. He took note of the work PARA was doing through the Differently Abled Peoples Collective. He wanted Persons with Disabilities to be given all due respect and care and that they are always treated as equal. They should never be hurt with abusive names or comments. He appreciated the stance of the club members to fight discrimination by ''Celebrating Differences''. He wanted all to join hands with these boys and girls in their fight for self-respect and dignity, and to treat all as equals.

Quoting a Human Rights Club member who said that ''once he was in the school. Now as a member he is on the stage'' the minister appreciated the pun in naadu / nedu that the child unwittingly expressed. He asserted that during the coming 5 years, with the support of the present Chief Minister, Jagan Mohan Reddy, there would be a total transformation in the field of education. He then recalled each of the ten items in the memorandum submitted by the students and said that he would follow up each one of them.

The minister responded very positively to the plea to integrate Human Rights Education in all schools in the state in collaboration with PARA. He wanted to see Human Rights Clubs functioning in the 45,000 odd schools in the state. He promised to work along with PARA to empower children on their rights. ''I extend my full support towards achieving the goal of transforming the lives of students'', he said. He added it was important to have values as learning alone would not make students socially responsible citizens. ''The children's voice should be heard and views should be respected,'' he asserted repeatedly. He asked the children to continue to raise their voice against any form of discrimination.

The education minister asked the students and their guide teachers to stand tall and fight against any form of discrimination. ''I am pleasantly surprised to hear the Club members assert that ''Today's Children are Today's Citizens.''

Roshan Kumar, State Advisory Committee member, referring to the recent unfortunate events leading to the Disha Act, spoke of women coming forward to fight for their rights. There was a time, and it still continues, when whoever spoke of rights were blacklisted.'' Now with girls and boys speaking of rights, and with the spread of Human Rights education, everybody will have their attention on the progress children are making. Children should also come together in large numbers and ensure the rights of other children, especially the less fortunate.

Earlier in the day, PARA Director Father V Ignatius reviewed with the club members the 17 Sustainable Development Goals. He elicited from the students how they wanted their school to be and the kind of facilities they were expecting in their schools. Surprisingly, the club members wanted that counsellors be appointed as many children were wasting their lives in the name of love or with the mobile phone or were having other problems. Some girls asked for Self Defense courses for students and an App to keep track of the whereabouts of women and children for their protection in the light of increased number of crimes against children and women. Many children wanted their schools should be gender-friendly. The director challenged the children strive to achieve the goal of gender equal society. For this, as HRC members they needed to create awareness on Gender, Domestic Violence, Sexual Exploitation, Child Labour, Child Marriage, and other social evils that were affecting many areas of social life. All these ideas were put together in the memorandum that was submitted.

The Public events of the National Convention started with a Dimsa Dance by HRC members from Paderu. Vijayawada Central Constituency MLA Malladi Vishnu spoke of the advantage of such conventions like this demonstrated to make the public and the authorities the advantages of children's participation and helped them understand the state of schools and problems they were facing in their everyday running. He said through talks we could solve issues. ''Children should not be working; they should be studying. Education is their basic right,'' he said. He lauded children who were fighting child labour, child marriage and child rights related issues.