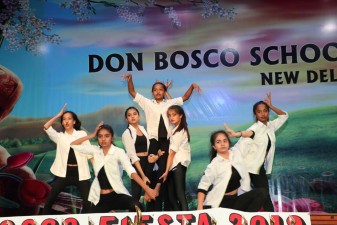 The event was organized under the able leadership of Father Davis Maniparamben who I spoke about Don Bosco's vision of improving the lives of young people. The event consisted of 4 competitions namely mime, rangoli, western music, and western dance competitions. Twenty-five schools from Delhi participated in the event this year.

The chief guest on the first day was Mr. Kuldeep Singh, Principal of Rajkiya Pratibha Vikas Vidhyalaya he was highly appreciative of Don Bosco School's role in encouraging young talent. Master Nikhil Vohra, an odishi dance prodigy enthralled the audience with his performance.

The next day of Bosco Fiesta was graced by the presence of Father Jose Mathew, Provincial, Salesian Province of New Delhi as the chief guest and Father Babu Varghese as the guest of honor. Father Babu invited the young people to be agents of God's blessings in a world where anger,  disappointments, revenge, and rivalry exert tremendous influence on people. The guests thoroughly enjoyed the performances, blessed the contestants and appreciated the smooth organization of the program.

The overall winner of the event was Holy Child Auxilium School, which won different positions in all competitions.