Say No to Drugs 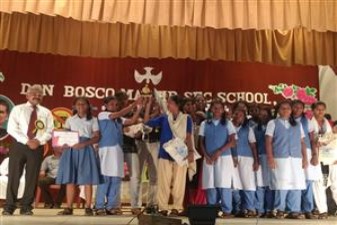 One hundred and seventy nine students from fourteen different schools participated in this event. They competed in elocution, painting, quiz, skit, singing and Rangoli on the theme of ''Say No to Drugs''. This enthused the children to give vent to their creative skills and talents. Dr. Sahayaraj from NIMHANS (National Institute for Mental Health and Neuro Sciences) addressed the children on the evils of drug abuse and how they can fight against this deadly threat to the lives of the young today.

Dr. A. Jesudoss, Dean SRM Medical College, Trichy presided over the function. Sr. Magnificat FMA, a former Provincial, inaugurated the competitions and Father Antony Joseph SDB, Provincial of the Salesian Province of Tiruchy distributed prizes for the winners. Beside the award winners, all the students received certificates and souvenirs for their very participation.

Father Thomas Louis the Rector and Father Sahayaraj the Principal of Don Bosco Thanjavur were guests of honour. Mr. Jesuraj, the National Secretary of the Salesian Cooperator of Tiruchy Province proposed the vote of thanks. Father John Dharman, Director of the De-addiction Department coordinated this event with the help of his team headed by Mr. Ravinder. Salesian Cooperators of Thanjavur were a major partner to this event and they were coordinated by Mr. Jesuraj, their South Asian Secretary. Children turned off the day with an oath, 'Say No to Drugs.'