Faculty and students use radio for education to love 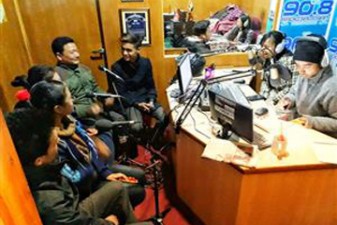 Sonada — In a rare gesture of creating public awareness on YOUTH & LOVE on Valentine’s Day a group of 3rd year students and 3 faculty members went LIVE on Radio Salesian from 11 am to 12 noon, 14 February 2019.

The program started with RJs welcoming the participants who in turn introduced themselves and talked on topics like: Youth and Love; Love is Life; Love is Selfless; Love and Relationship, and more.

”The students opened up slowly speaking on the topics and showed extraordinary maturity speaking about love and relationship,” said RJ Bryan.

”Ego and uncontrolled anger are the major causes for the break up of relationships today,” said Dr Terence Mukhia who enlightened the listeners on the most common reason for divorce today.

Student Sarad Tamang insisted, ”There should not be possessiveness in love. If we really love some body we should give him or her the space to be himself or herself, and let go.”

Vice President of Student Council Ashwini Tamang said she had no plans to celebrate Valentine’s Day. However, talking over radio was a great opportunity to express herself.

”It was my first time on a radio show and though I was very hesitant at the start, I loved being on the panel discussion,” said student Surekcha Rai.

Student Yeshe Wangdi was ”thrilled when phone in session got the panel discussion very lively.”

It was the first time that Radio Salesian estd in 2016, hosted live panel discussion to mark Valentine’s Day.

Valentine of Rome was a priest in Rome who was martyred in 269 and was added to the calendar of saints by Pope Galesius in 496 and was buried on the Via Flaminia. The relics of Saint Valentine were kept in the Church and Catacombs of San Valentino in Rome, which ”remained an important pilgrim site throughout the Middle Ages.

The Romans had a festival called Lupercalia in the middle of February – officially the start of their springtime.

In India, the day also celebrates the ancient Indian tradition of #KamadevaDivas.