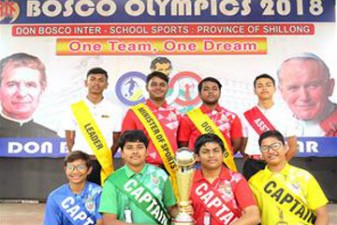 The Bosco Olympics 2018 began with the inaugural function graced by Shri Dilip Chandra Nath, the Vice Chancellor of Assam University as the Chief Guest and Col. Shamsher Singh, the Commanding Officer, 57 Mountain Division Ordinance Unit as the Guest of Honour.

Father Nelson Joseph, the Rector and Principal of Don Bosco School, Silchar welcomed all the Salesians, Sisters, Bosconians and teachers who had come from the states of Meghalaya, Mizoram and Tripura. He exhorted all the participants to compete in the true spirit of sportsmanship and fair play and be a legend and create history.

The Bosco Olympics flag was hoisted by the Chief Guest and the school flags by a student representative from each school. One of the main attractions during the inaugural programme was the March Past performed by the various schools that displayed a spectacular synchronization and Team Work.

During his speech, the Chief Guest congratulated the Don Bosco fraternity for the magnificent sports meet. He added that such exposure is needed for the students for a holistic formation. The Guest of Honour emphasized on conducting such sports, which is an essential part of a child’s growth and development.

He further added that sports teach one to be humble and accept defeat sportingly. The gathering witnessed the martial arts performance of the students followed by the ceremonial lighting of the Olympics flame and various field and track events.

The event concluded with Col. Pradeep Yadav, the Commanding Officer of 11 Madras Regiment, Masimpur as the Chief Guest amidst a serene evening. The most coveted Champion’s Trophy for both boys and girls was bagged by Don Bosco School, Silchar. The First Runners Up for Boys was Sacred Heart School, Shillong.

The Third Runners Up for the Boys was Don Bosco School, Lawngtlai and for the Girls, it was Don Bosco School, Siaha. The Don Bosco fraternity congratulates all the participating schools as well as the winners. The event concluded with a hope to organizing similar events in future. It was indeed a thrilling and fun filled learning experience for all.